If you could hang out with President Obama, what would you ask him? Would your question be about jobs or unemployment? The threat of nuclear weapons? Immigration reform? Whatever your question is, submit it on YouTube for the opportunity to ask the President directly in a special interview over a Google+ Hangout from the White House.

On Monday, January 30, a few days after delivering his State of the Union address to the nation, President Obama will answer a selection of top-voted questions you’ve submitted in a live-streamed interview. Starting today through January 28, you can visit the White House YouTube channel to submit your video and text questions and vote on your favorites. Your YouTube questions will drive the interview, and several participants with top-voted questions will be selected to join the President in the Google+ Hangout to take part in the conversation live.

So take out your camera, check your hair and go to youtube.com/whitehouse to submit your question now. Need ideas? Visit youtube.com/whitehouse on Tuesday night at 9:00pm ET to watch the President’s State of the Union address live. The address will be followed by the Republican response on Speaker Boehner’s YouTube channel.

Video questions are preferred (though we also accept text) and should be about 20 seconds long. In the video description, be sure to tell us a little bit about yourself, like where you’re from.

Your Interview with President Obama will be streamed live at 5:30pm ET on on January 30 on youtube.com/whitehouse. You have until midnight ET on January 28 to submit your question and make your voice heard on the issues that matter to you.

Earlier today, President Obama spoke about the importance of helping returning military veterans find work. Thousands of businesses have committed to hiring military veterans and families and as part of this nationwide effort, starting today, job seekers can visit the National Resource Directory (NRD) to search more than 500,000 job openings from employers around the country. 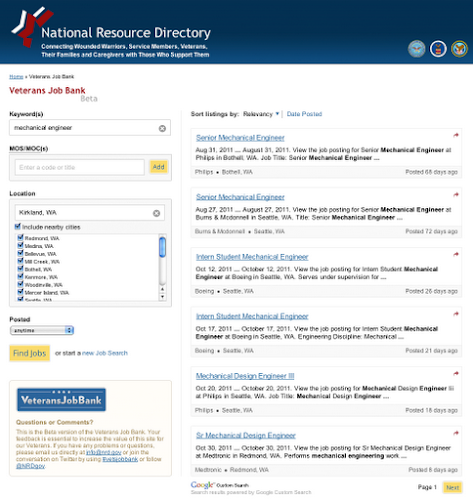 If you’re an employer, you can find more information on how to participate on nationalresourcedirectory.gov. In addition, organizations such as local veterans’ groups can help people find jobs by adding a veteran-committed jobs search box to their websites.

We’re happy to contribute to this important initiative and hope businesses use this opportunity to connect with veterans seeking employment.

Last week, 17-year-old Shree Bose from Fort Worth, Texas, the grand prize winner of the Google Science Fair, visited Washington, D.C. at the invitation of the White House. We invited Shree to write about her experience in the capitol. – Ed.

Adrenaline. I turned around as the brilliantly polished door behind me opened, and suddenly I was face to face with a man I’d seen so many times on television. The President of the United States calmly extended his hand to shake mine and those of Naomi and Lauren, the other two winners of Google’s first-ever Science Fair. He knew about our projects and was genuinely excited to talk with us.

The Oval Office is more than just a room. It has a palpable aura of grandeur, with the presidential seal in the center of the deep blue carpet and a portrait of George Washington hanging on the wall. The desk, where presidents of the past have contemplated some of the most important decisions in the world’s history, was polished to a gleam. President Obama leaned against it as he talked to us.

He asked us how we became interested in science, what our plans were for the future and which colleges we were interested in. Smiling, he told us to stick with science. We left the Oval Office feeling like our individual futures were important to the nation’s future; like we could change the world.

Our trip to Washington, D.C., also included visits to the National Institute of Health, the Environmental Protection Agency and the U.S. Department of Agriculture. Over our two days, we were given the opportunity to sit down and talk with many of our country’s leaders who have not only been extraordinarily successful in the fields we wish to go into in the future, but who also encouraged us to follow our own dreams. It was more than just meetings; it was inspiration. Last January, U.S. President Obama challenged the nation to train 100,000 high-quality science, technology, engineering and math (STEM) teachers in 10 years. Google in Education decided to answer his call to action and became one of the founding members of a community of action called 100Kin10.

We shared our plan with U.S. Secretary of Education, Arne Duncan, and his staff in April, who gave us their full support. With this backing, we were able to announce 100Kin10 in June at the Clinton Global Initiative (CGI) America meeting in Chicago. CGI also identified STEM education as one of its focus areas for its new branch of U.S. Initiatives.

This past week, 100Kin10 officially kicked off with 80 partner organizations, all contributing to a threefold mission: to reverse the United States’ decades-long decline in STEM subjects, to ensure that all children have the basic STEM literacy to be full participants in our economy and democracy and to enable U.S. students to address the most pressing national and global challenges.

Google has made commitments to increase the supply of high quality teachers and retain excellent STEM teachers. Specifically:

We believe every student should have access to high quality teaching and educational opportunity. We also recognize that as a collective, we can better measure our progress and take significant strides toward fulfilling the commitments the Department of Education has made around STEM teaching.

We welcome big challenges and look forward to helping achieve great success with 100kin10 in the months and years to come. For more information on Google’s efforts in education, please visit our education website.